Last few days to Vote for your Favorite Video

Save All Day Online

Vote For ‘Your Favorite Video’ Contest through Oct. 25 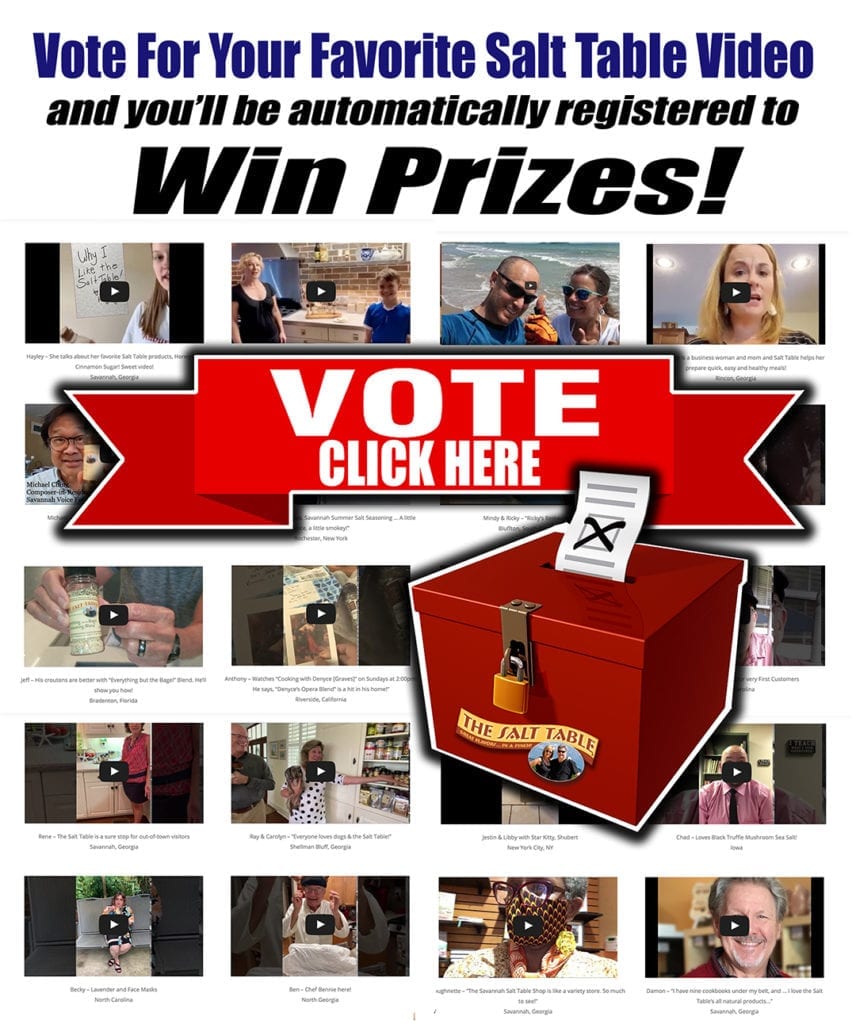 Vote For “Your Favorite Video” Contest through Oct 25

* Cannot combine with other offers. Excludes Gift Certificates, Photography, S&H and Taxes, if any. Limited Time and While Supplies Last.

Scroll Down for all of Damon Lee Fowler’s recipes.

More will be added weekly. So, come back soon!

These amazing recipes (below) were developed by the award-winning cookbook author, Damon Lee Fowler. Bookmark this page and visit often as we will be adding new recipes every week.

Also, be sure to check out three of Damon Lee Fowler’s most popular cookbooks. All are available for sale at the Salt Table shops and online. And, all three are autographed. 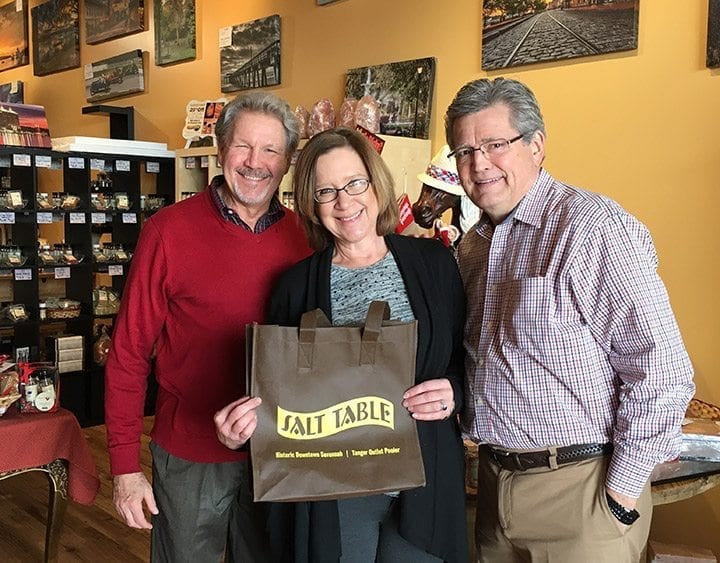 Damon Lee Fowler (left) recently held a booksigning at The Salt Table shops in Savannah and Pooler Georgia. Carol and Dave are very proud to host such a prolific and notable cookbook author. His books are available in the shops and online. These books are also autographed by Damon.

About the Author: Damon Lee Fowler is a culinary historian, cooking teacher and food writer. A nationally recognized authority on Southern cooking, he is the author of nine cookbooks, including Classical Southern Cooking, Beans, Greens, & Sweet Georgia Peaches, Savannah Chef’s Table, Essentials of Southern Cooking and, most recently, Ham: A Savor the South Cookbook. He has written historical commentary on a number of historical cookbooks and was editor and recipe developer for Dining At Monticello for the Thomas Jefferson Foundation. He is the featured food writer for the Savannah Morning News and has written for such national publications as Bon Appetit, Food & Wine, Garden & Gun, Relish and Local Palate. He lives, eats, and writes in Savannah, Georgia. 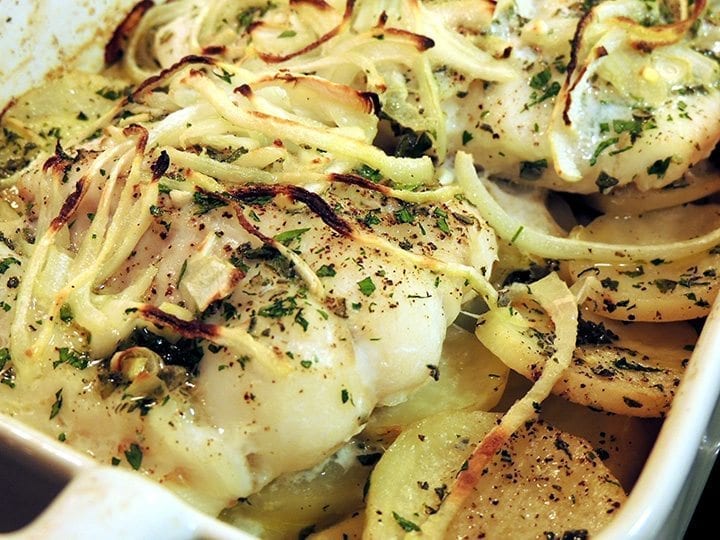 Baked Fish with Potatoes and Onions

Use Discount Code When Checking Out Today:  BakedFishRecipe
Save at least 15% (and up to 50%) on everything on the Salt table.com Web Site
Offer Good Online Only. Cannot be combined. Excludes Gift Certificates.  This discount ends soon.

Based on a classic dish from the traditional cooking of Genoa, Italy and a strikingly similar dish that my mother made often during my childhood, this is so easy to put together and the All Round Good Grinder Blend is a perfect seasoning to enhance its earthy character.

Other Salt Table Seasonings that are perfect for this dish are Tybee Island Coastal Blend, Spanish Moss Blend, and Southern Italian Blend.

How To Make It: 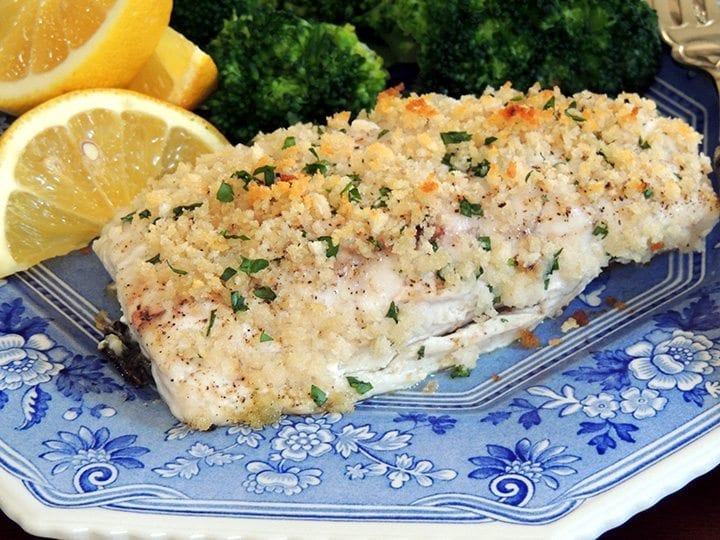 Baked Fish with Lemon and Crumbs

Equally perfect for busy weeknight dinners as well as weekend entertaining, these crumb-topped fillets are simple to put together, even more-so when they’re seasoned with All Round Good Grinder Blend. They would also be delightful with Tybee Island Coastal Blend or Southern Italian Blend.

Even if the ready-made boxed crumbs were from good bread (they aren’t), their texture and flavor is never as good as those that are homemade, and making your own is not enough trouble to justify taking the short cut. Here is my method.

Preheat the oven to 250 degrees F. Trim the crust from stale, unflavored (without sugar, herbs, garlic, cheese, olives, etc.) European-style bread and cut into 1-inch cubes. Spread the cubes on a rimmed baking sheet in one layer. Bake, stirring occasionally, until dry and crisp and just barely golden. Let them cool completely. In batches, transfer to a sealed freezer bag and crush to crumbs with a rolling pin. You may also process in a food processor fitted with a steel blade until evenly ground. Keep in mind that the dry, crisp bread is likely to scratch the sides of the plastic work bowl over time. If you want to keep that from happening, go to the trouble of crushing them by hand. Dry crumbs keep indefinitely when stored in airtight tins. 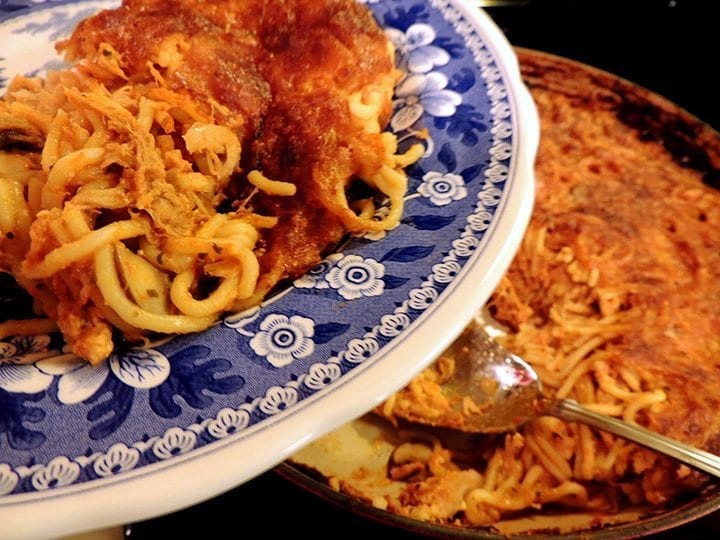 The 1950s and 60s classic Chicken Spaghetti could be quite involved since the chicken, sauce, and spaghetti all cook separately and are then assembled. This is a streamlined take on the idea that goes together in minutes thanks to The Salt Table’s Pride Blend and market rotisserie chicken. The pasta bakes in the same big skillet in which you’ve made the sauce.

This is also very nice made with penne or rotini (short fusilli).

Adapted from my book Essentials of Southern Cooking (Lyons Press/2013), the recipe was originally intended for grouper, but it also works well with sea trout (photographed), sea bass, snapper, pompano, and cod.

The Salt Table’s All Round Good Grinder Blend not only simplifies the seasoning but actually enhances the orange, ginger, and sherry combination better than the original seasonings. Another great Salt Table Seasoning for it would be Tybee Island Coastal Blend. 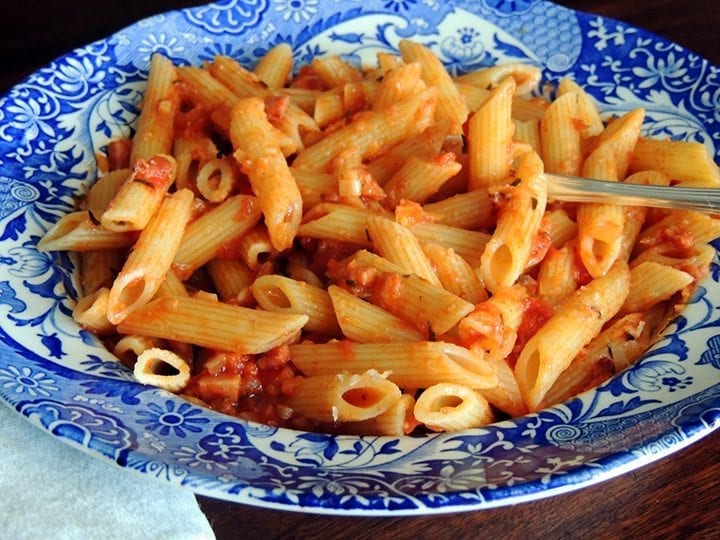 Penne with Ham and Tomatoes

Adapted from my book Ham: A Savor the South® Cookbook, this hearty sauce is simplified by seasoning it with All Round Good Grinder Blend. Southern Italian Blend would be another excellent seasoning as would Cobblestone Blend. I serve it as a main dish followed by a simple mixed green salad. 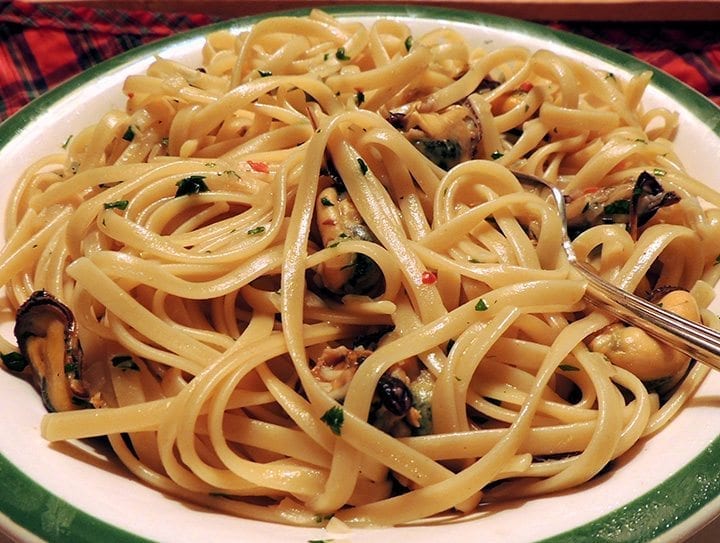 The Salt Table’s All Round Good Grinder Blend is, as its name suggests, great with almost anything, and is very nice with seafood. It’s a great shortcut to flavor in this classic pasta sauce. Other Salt Table blends that would also be great in this sauce are Pride Blend, Southern Italian Blend, and Tybee Island Coastal Blend. 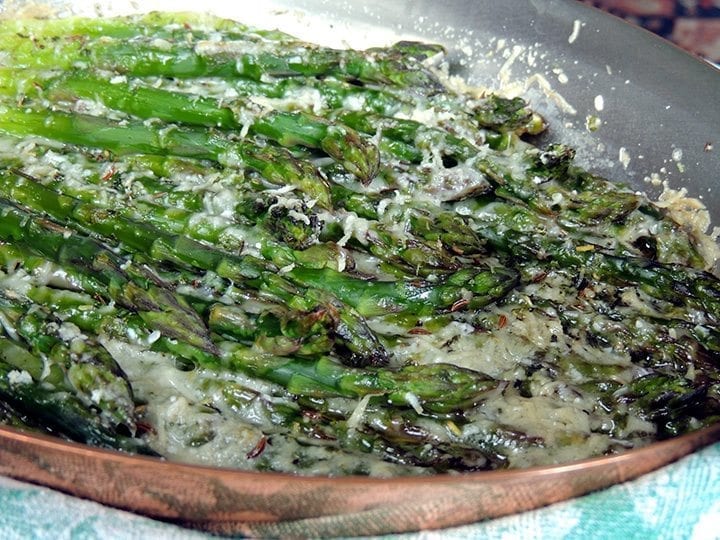 (Salt Table blends that are also great with this asparagus recipe are Leek, Chive, and Onion Seasoning and Dip Blend and Tybee Island Coastal Blend.)

One of the great dishes of spring’s table in Parma, Italy, is fresh, fat asparagus, layered with butter and cheese and baked until the cheese is just barely golden. The Salt Table’s Shamrock Dust really brings out the fresh spring flavor in this classic dish.

* Another Salt Table Blend that are great with asparagus is Leek, Chive, and Onion Seasoning and Dip Blend and Tybee Island Coastal Blend. 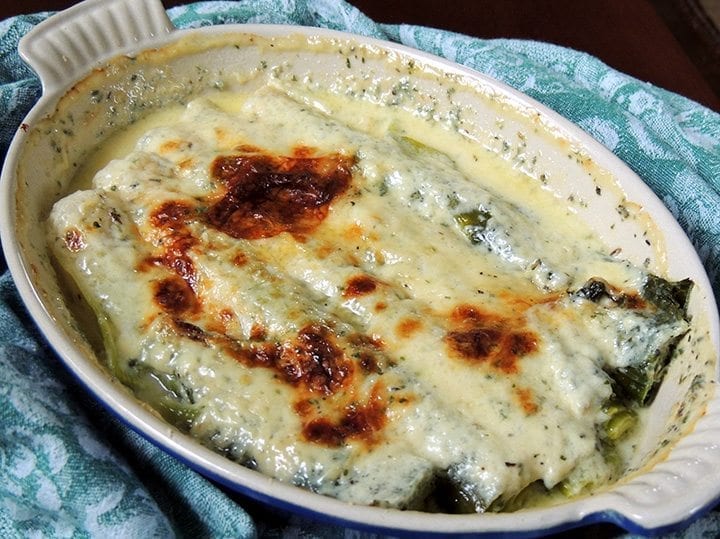 The Salt Table’s Shamrock Dust (or All ‘Round Good Grinder Blend, or Southern Italian Blend)

We don’t often give leeks a starring role on their own, but in the spring when they’re fresh and new they make a great vegetable side dish. The Salt Table’s Shamrock Dust is the perfect seasoning to bring out their freshest and best spring flavor.

* Other Salt Table Blends that are great with these and other green onions are All ‘Round Good Grinder Blend and Southern Italian Blend.

The natural coconut flavor of the Salt Table’s Coconut Sugar intensifies the flavor of fresh grated coconut and, when you don’t have a fresh nut to grate, perks up frozen flaked coconut. 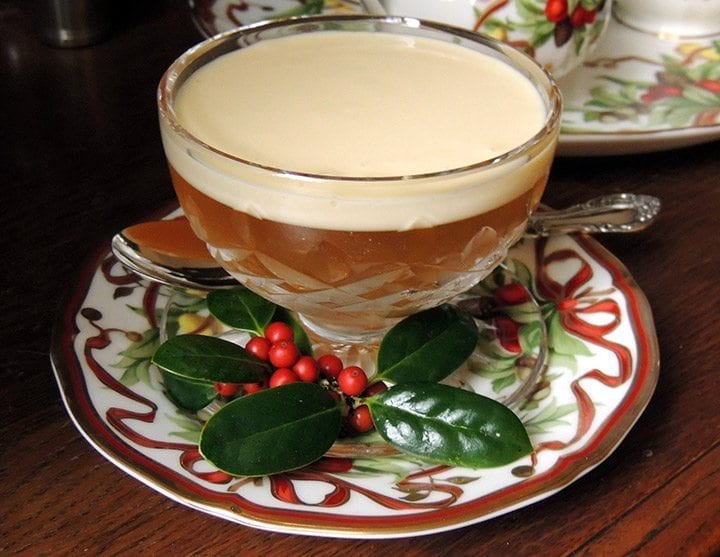 This old-fashioned holiday treat has lost a lot of its cachet thanks to the advent of packaged flavored gelatin, but it is a lovely, light dessert that (somewhat) counterbalances heavy holiday fare, especially when we’ve rather over-indulged ourselves.

The Salt Table’s Cinnamon and Vanilla infused sugars simplify the spicing of this traditional treat and infuse them with deep flavor without having to food with whole cinnamon sticks and vanilla beans.