High Performance! A Seasoning Blend with Turmeric … for Runners, Athletes … and the rest of us!

AVAILABLE ONLINE ONLY with DISCOUNT CODE: thanks22

* The free gift will be automatically added to each order purchased during this special “Thank you” sale. With discount code Thanks22, every product online that isn’t already on sale will be discounted 10%, plus save up to 50% on other selected products. This offer excludes gift certificates as well as photos and canvas prints. However, in a different promotion all sizes of the photography are on sale online at 10% off, plus, all photos and canvas prints will be SHIPPED FREE to your door. The discount on photos requires the discount code: photos22. These two offers cannot be combined, and both offers will end without notice.

High Performance! A Seasoning Blend with Turmeric … for Runners, Athletes … and the rest of us!

This is the Salt Table’s seasoning blend DESIGNED FOR ATHLETES and the rest of us!

Made with turmeric (curcumin) and other healthy ingredients, High Performance Blend has a very distinctive and delicious flavor and is great for muscles and joints because of its anti-inflammatory benefits. Curcumin is also a very strong antioxidant. It is very versatile and is excellent as a dip or flavor for soups, stews, eggs, chicken … you name it. The best part is this seasoning blend is a favorite with folks with joint and muscle issues, even if they’re not athletic. 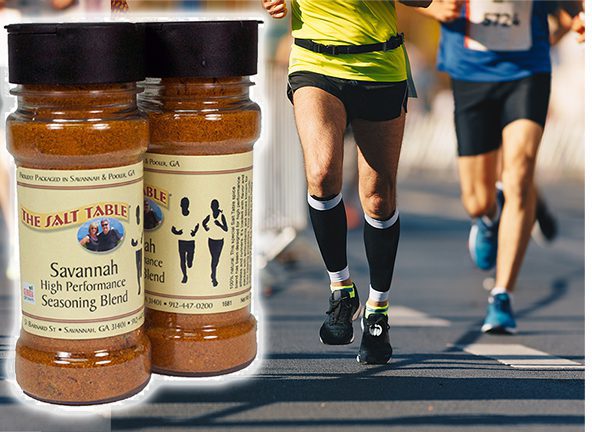 The beautiful City of Savannah is widely known for its Marathons, Half Marathons and 5K races. So, in keeping with this tradition, this special Salt Table seasoning blend was designed by Carol for high-performance athletes and runners. It was introduced at the sign in for the Publix Half Marathon and 5K race in 2016. It became an instant hit!

It tastes great, seasons just about any dish, and it’s good for everyone … imagine that!

The Savannah “High Performance” Seasoning Blend is loaded with flavor and packed with antioxidants and spices known for their healing properties, including turmeric, ginger, paprika, garlic, onion, cinnamon and many other of nature’s best flavors.

This delicious, multi-purpose spice blend is amazing in so many recipes… including: rice, pasta, eggs, veggies, dips, & soups and also excellent on meats & seafood. Especially good in yogurt or sour cream for a easy and fast dip with veggies.

Recipe: As a veggie dip or with chips: Add one cup of sour cream with 11/2  TBSP of seasoning blend.  (Use more or less to taste). Mix well. Let sit for at least 1/2 hour before serving and keep chilled until served. You’ll love it.

Be the first to review “High Performance! A Seasoning Blend with Turmeric … for Runners, Athletes … and the rest of us!” Cancel reply
Search Products
Cart